When Andy Robertson shakes hands with Eden Hazard on Friday night in his capacity as the newly-appointed captain of Scotland, it will be merely the latest chapter in his stunning fairytale rise.

It will not, however, be the first time the talented left-back will have been found at Hampden Park stretching out an arm towards the visiting superstar skipper of Belgium.

Released by Celtic for the depressingly familiar crime of ‘being too small’, Robertson worked the occasional evening at the National Stadium in 2012 as he rebuilt his career at amateur side Queen’s Park. 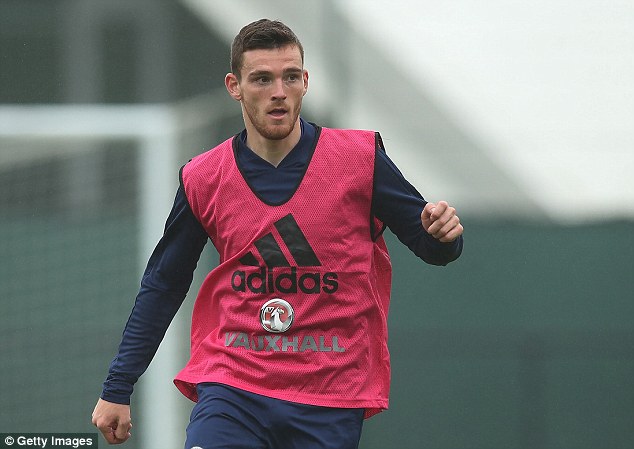 His job was to hand out programmes to VIP guests and it was in that capacity he came across Belgium and Manchester City colossus Vincent Kompany, in Glasgow on a spying trip before a World Cup qualifier against the Scots.

After Robertson was called up by his country for the first-ever time, Kompany tweeted a good luck message to the young Scot: ‘Andy Robertson, stories like yours are inspiring! Wish you all the best!’

Yet for Robertson, that was only the beginning of his remarkable journey. After excelling at Dundee United then Hull City, Robertson starred for Liverpool as Jurgen Klopp’s side reached last season’s Champions League final against Real Madrid.

After being confirmed on Monday as Scott Brown’s successor in charge of the national team armband, ahead of other candidates like Celtic’s Kieran Tierney, Scotland head coach Alex McLeish hailed the 24-year-old as the standout for the role given his meteoric rise.

‘When you consider he’s had setbacks a couple of times; it is the epitome of a true Scot to never give up.

‘Andy was the outstanding candidate. His rise-and-rise at Liverpool and at national level was sensational.

‘He carries himself well and is a tremendous professional. I know a lot of players inspire each other and Andy is an inspirational figure.’ 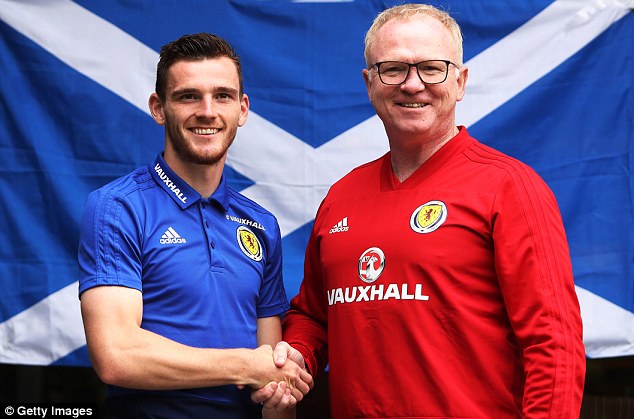 For Robertson, this latest milestone is his proudest yet in a remarkable career.

‘It’s a massive honour for me and my family – it’s a great day for us,’ he said.

‘I’m looking forward to leading the team out on Friday, and leading them out in the future.

‘It’s probably the pinnacle of my career. I look forward to trying to lead this country back to major tournaments.’

Scotland assistant Peter Grant believes the Liverpool left-back should serve as inspiration to all players whose dreams are in danger of being crushed.

‘I think it is great for young Scottish players,’ he said.

‘His is the sort of story that will give them hope. There are so many players who are released at a young age and they think it is the end of the world.

‘But Andy Robertson is proof that rejection is only one man’s opinion. If you want to get there then you keep fighting.

‘Andy was released by one club and he’s gone back to playing amateur. All of a sudden he’s bounced back and he is playing in a Champions League final and playing exceptionally well in a fantastic Liverpool side.

‘Now he’s gone from handing out programmes at Hampden to leading the team out there. It’s a remarkable story.’

With the Nations League campaign starting on Monday, Robertson will turn his sights towards leading Scotland out of the international wilderness.

The national team has not qualified for any major finals in 20 years since the World Cup France 98.

But Grant believes ‘priceless’ Robertson is symbolic of a Scottish game on the rise once more and he hopes his Boys’ Own-style adventure includes leading his nation to Euro 2020.

‘People knock the Scottish game but when you watch the game up in Scotland young boys are getting a chance,’ he said. ‘There are still good Scottish players out there.

‘Down in England, there are a lot of great young players but it’s impossible for them to break into the big teams.

‘For someone like Andy to come down and break through at Hull and now Liverpool is amazing.

‘I remember people questioning the £7million Hull were wanting for him but people say he is unaffordable now!’

Charlie Mulgrew skippered the side on their summer tour, although Aberdeen centre half Scott McKenna took the armband for the Mexico game.

The Blackburn Rovers players were happy to step aside from the role and will now help facilitate a smooth handover to ‘highly respected’ Robertson.

‘Charlie took it fantastically well,’ said Grant. ‘He has been a fantastic leader and he will play a big part for helping out Andy. It is a difficult role because it is not a club side where you are there day in and day out.

‘You are leading a group who are meeting up only now and again, who are a mix of different players from different clubs.

‘You are trying to embody that and mix in and not just sit at tables with your own friends.

‘You have to make sure that group is happy.

‘Some captains are quieter and there are other guys who talk a lot and mix a lot.

‘Andy has the combination of both of those styles. We just like the way Andy goes about his business and the way he handles himself.

‘We have a mixture of young and older boys and we just felt we needed someone as captain that they all look up to. There’s no doubt they look up to Andy Robertson.

‘All of the players know his journey and when the manager announced he was the new captain the boys all showed him respect.

‘We only had to see the appreciation of the other players when the manager announced Andy was captain to know we made the right choice.’