Jurgen Klopp “had an idea.” It revolved around Xherdan Shaqiri, Mohamed Salah and the tall guys in Southampton’s defence.

It revolved around set-pieces, and a half-hour training session carried out beneath a thunderstorm the day before the game. 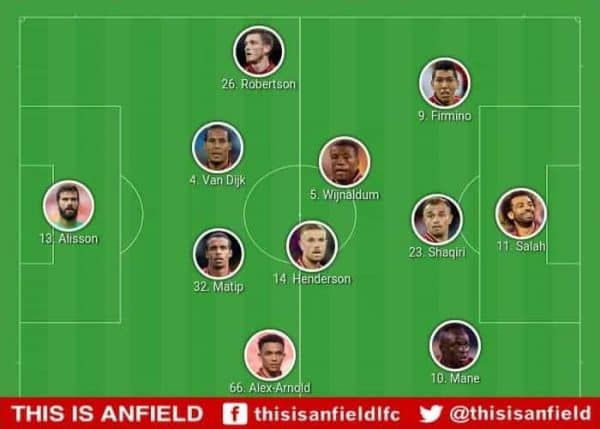 Liverpool scored three goals from “around set pieces,” as Klopp described them after the game, with Shaqiri involved in two of them, and Salah scoring one.

The Egyptian hadn’t scored for three games, but playing in the centre-forward position gave him the opportunity to run rings around Southampton defenders Jannik Vestergaard—the tallest outfield player in the Premier League—and Wesley Hoedt.

He was able to touch the ball 14 times in the opposition area compared to eight against Spurs and 10 against Paris Saint-Germain, though the quality of the opposition needs to be taken into account when deciding whether this is significant.

Salah’s contributions weren’t just attacking ones, though, and he made three important ball recoveries in midfield which led to counter-attacks, as shown in red in the graphic below from Twelve Football: 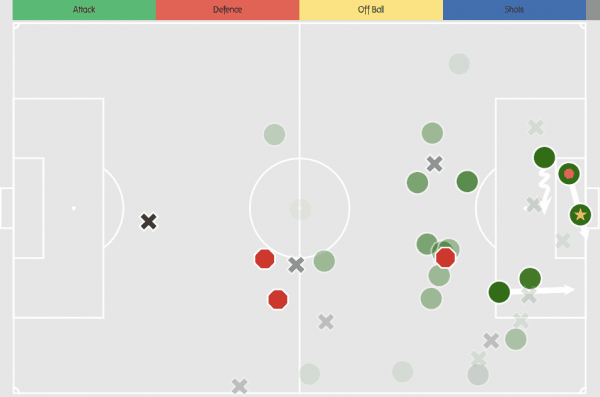 He won the free-kick from which he scored after Shaqiri hit the bar, and almost scored a back-heel, which wasn’t the behaviour of a man lacking confidence.

Shaqiri’s position was the attacking midfield role which provides echoes of a central three, but can also resemble a 4-2-3-1 becoming a 4-2-4 at times when attacking.

This is a role which has been played in the distant past—at least where Klopp teams are concerned—by Adam Lallana, and more recently by Alex Oxlade-Chamberlain, and though a midfield three can be made out at times, there is no doubt that it is different to the standard 4-3-3.

Klopp was pleased with attacking side of this shape, which was seen for the first time this season, but not the defensive side, and only stuck with it for 45 minutes.

“We changed system to bring Shaq in a comfortable position, and wanted to make it a bit more difficult for Southampton to be really prepared for what we do.

“We knew the two tall boys in the centre would play, so bring in Mo there. Offensively it was really good, but defensively we were not used to it.”

While Klopp wasn’t pleased with the defensive side of the system he used in the first 45 minutes, this was more to do with the shape and positional discipline rather than the individual performances.

The manager says it needs work, so with that in mind he might be tempted to work on it again for the League Cup game against Chelsea on Wednesday night.

Shaqiri was pulled at half-time as Klopp looked to solve the problems he saw with this defensive shape in the first half, replacing him with James Milner, who has become as much of an auxiliary full-back as he has a midfielder in the past couple of games.

This was evident against Paris Saint-Germain, and in the second half against Southampton.

Whereas Shaqiri will err towards joining the front line from his attacking midfield position, Milner will look to cover wherever he is needed.

A lot of this work involves supporting Trent Alexander-Arnold or Andy Robertson, depending on which side of the pitch he finds himself on.

The two touch maps below show the extra defensive cover Milner offered, with Shaqiri (orange) only performing six actions in his own half, compared to Milner’s 18 (grey): 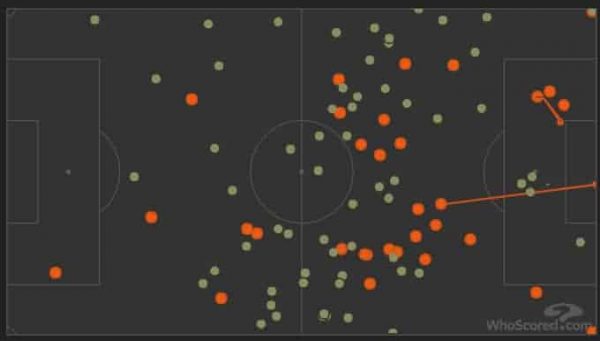 “I wanted to control the game, and go back to our normal formation, and that helped, and of course we really controlled it,” explained Klopp.

The AttackMomentum graph from SofaScore shows Liverpool’s first-half dominance and second-half control, plus a flurry of attacks late on.

The average positions from the entire 90 minutes are skewed due to the regular changing of positions. Even Milner played first on the right side of midfield, and then on the left once Naby Keita replaced Georginio Wijnaldum.

Sadio Mane began on the right and moved the left in the second half, meaning the average position data shows him as somewhere in the middle of the park, which is misleading.

The two formation images, included at the start of the article and below, are more accurate representation of the players’ positions during the game. 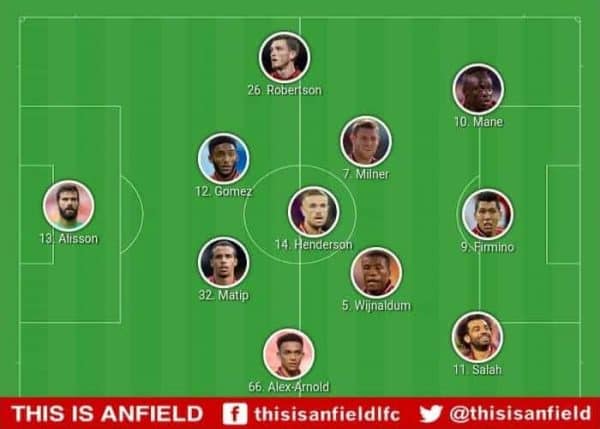 “The whole team was not used to that what we did today. The only problem was defensive. Offensively it was a good idea but we have to work on that more,” added Klopp.

Despite Klopp’s misgivings regarding the defence, his side limited Southampton to one shot on target, and five of their seven shots were blocked before they had chance to do any damage.

The visitors’ expected goals number was just 0.31 to Liverpool’s 1.78 (which doesn’t take into account the own goal): 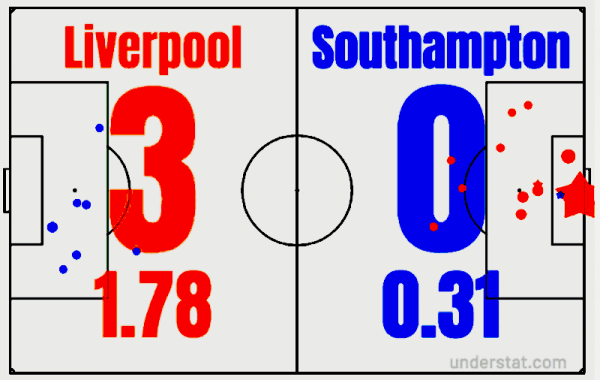 They remain the best defensive side in the Premier League so far this season, having conceded the fewest goals with two, and the fewest expected goals against with 3.25 according to Understat.

There haven’t been many times in recent Liverpool history where the team appear so in control on both sides of the ball, but especially on the defensive side.

Bigger tests are just around the corner, and Klopp will come up against three of the most highly regarded managers in the game—Maurizio Sarri (twice), Carlo Ancelotti and Pep Guardiola—in the next four games. 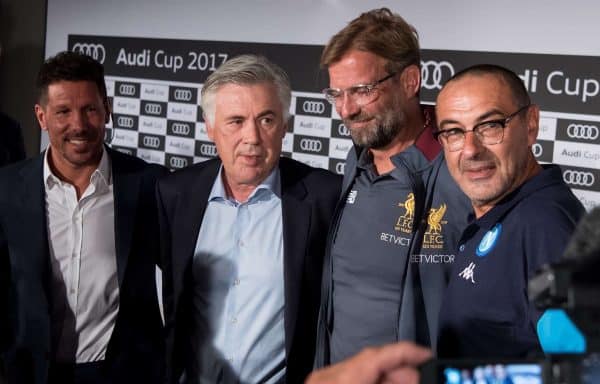 Given the new mentality in the Liverpool camp and, it seems, among the supporters, this group of games is eagerly anticipated rather than feared as they might have been in the recent past.

It would be an unbelievable performance to come out of this run of games unscathed, but if any Liverpool side can do it, then it’s this one.

Either way there will be plenty to analyse tactically as these managerial heavyweights clash at the top level.