Because Mohamed Salah made history. He did something that only two of Liverpool’s other goalscoring greats had ever managed, bringing up 40 goals in a season for them.

The watching Welshman saw a successor emulate him. But Kevin Keegan or Kenny Dalglish never managed 40.

Nor did Robbie Fowler or Michael Owen. Fernando Torres and Luis Suarez, the two most recent of their superb strikers, did not either.

“That header was unbelievable.” But Salah is. He is Liverpool’s laid-back phenomenon. He has scored in every game he has started at Anfield since Boxing Day.

It is both routine and remarkable, ordinary and extraordinary. Even when he seemed to be enduring a rare off-day, missing a series of earlier chances, he still found the net. He still got his 34th goal in 33 games.

“Impressive numbers,” added Klopp. “Wow.” But even if Bournemouth had stopped Salah, they would not have halted Liverpool. 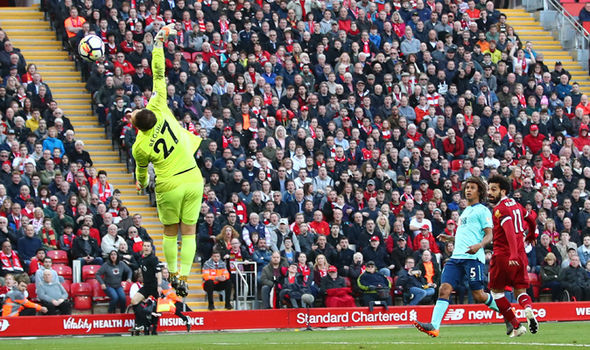 That is the beauty of Klopp’s prolific forward line. When Roberto Firmino joined Sadio Mane on the scoresheet, the £100million trio had 82 goals between them this season.

“Their front three are outstanding players,” added Howe. Klopp’s key three have fi red Liverpool into the last four of the Champions League.

Now they only need another six points to book another season in the European elite. They had the energy to build on victory at Manchester City. “The boys did fantastic,” said Klopp. “It was a brilliant game. Our counter-pressing was outstanding.”

They started superbly. Bournemouth could have been behind after three minutes, Salah shooting wide. 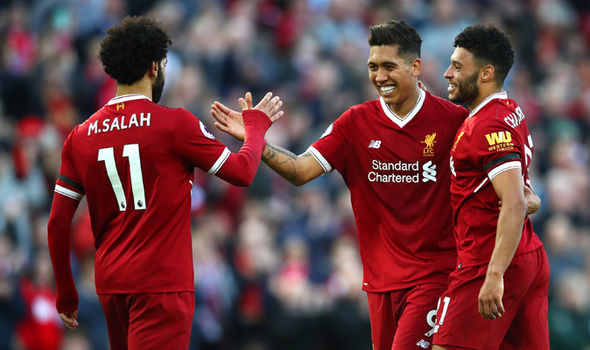 They were behind after seven, Mane finding the net at the second attempt. Begovic saved his initial header but not the subsequent shot.

It was quite a start for Liverpool and for their returning captain. Jordan Henderson was banned for their win at City and brought back.

He set up Mane’s goal. He supplied a series of chances. He was terrific. Salah’s early miss seemed to set the tone for his day. He directed two later shots at Begovic. Another was lofted over the bar. “The boys were searching for him a bit too much,” Klopp said.

But there is a reason for that. While Salah is known more for speed and skill, he showed aerial ability when he met the excellent Alexander-Arnold’s cross.

His scoring spree is, as Klopp said, “a win-win situation”. And then Firmino’s persistence brought its reward. As Howe admitted: “We encountered a team that were too good for us.”