Liverpool’s European campaign is off to a flyer courtesy of a 3-2 win at Anfield over Paris Saint-Germain. The biggest match of the day lived up to its billing as the match guaranteed goals and was finally settled in stoppage time. Liverpool raced to a 2-0 lead in the first half with Daniel Sturridge heading home the first goal and James Milner slotting a penalty in the back of the net.

Thomas Meunier pulled one back for PSG with a delightful left-foot strike to reduce the deficit before the break. Liverpool dominated the second half proceedings but against the run of play, Kylian Mbappe took his chance expertly and scored the equalizer for PSG.

But Roberto Firmino, a second-half substitute, had some plans of his own as the Brazilian latched home a stoppage-time winner to guide Liverpool to a famous victory. On that note, let’s take a look at the five key talking points that emerged from the high-profile encounter

A goal-fest was predicted by many in this game with two swashbuckling sides going head to head against one another. Paris Saint-Germain kept possession in the first few minutes but Liverpool’s harrying midfielders and pressing forwards got them back into the driving seat pretty quickly.

While PSG had more possession, Jurgen Klopp’s men dominated the first half with their attempts on goal and were duly rewarded in the 30th minute when Andy Robertson’s cross was met by Daniel Sturridge. James Milner soon made it two and alarms were raised about a possibility of yet another rout from the Reds.

But a team like PSG can never be discarded and just like that, the Parisians came back into the game at the right time through a Thomas Meunier strike. An entertaining first half saw three goals, an insane number of interesting duels and the promise of a classic European encounter. 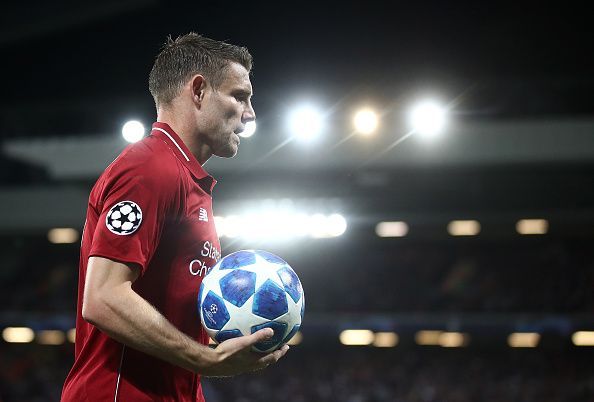 At 32 years of age, with 16 years of first-team football behind him with over 600 appearances, it is surreal to witness James Milner still operating at such a high level. Continuing his rich vein of form, Milner again notched up a sensational performance, this time in the Champions League.

The midfielder set the tone with a crunching tackle on Neymar and followed it up with a quick pass. Shuttling to the left and to the right, Milner made his presence felt and regained possession four times in the match. The veteran had 70 touches of the ball and also dispatched his penalty with disdain.

But Milner’s most important work came off the ball as he closed down the duo of Neymar and Kylian Mbappe simply brilliantly. For the winning goal, it was Milner again who dispossessed Mbappe. After such a statement performance, there is no doubt that James Milner has been Liverpool’s best player so far in the season.

Along with two deadly front trios going against one another, this match was also billed as a top-tier battle between two of the game’s talented forwards. Neymar vs Mo Salah. A lot was expected from the two superstars of the game but the duo could not deliver the goods under the Anfield lights.

Neymar started the game brightly and had his shot saved by Alisson in the first few minutes. But the Brazilian fizzled out of the game soon after. He was marshalled to perfection by Trent Alexander-Arnold and Jordan Henderson. Neymar was sub-par with his decision making and did not track back when needed.

Salah also looked lively at the start but was guilty of trying too hard at times. The burden of last season’s antics along with a dip in form is evident in Salah’s play. The Egyptian lacked confidence in some situations and took the wrong decision on numerous others. He was at fault for Mbappe’s equalizer and was certainly furious with his performance when he was taken off.

After Kylian Mbappe scored the equalizing goal for PSG, the game was there for the taking. Both sides had around 10 minutes to register a winning goal. Liverpool attacked with all their might and finally, the moment came that settled this encounter.

Roberto Firmino, a 70th-minute substitute, the Liverpool talisman, who could only see with one eye in training yesterday due to an eye injury, displayed terrific vision to score the winner and send Anfield into delirium. Firmino shifted from left to right with a blink of an eye, bamboozling Marquinhos and then drilling a powerful drive past the PSG goalkeeper.

It can be said that Liverpool deserved all three points on the night and anything other than that would have been a travesty for Jurgen Klopp and his team. All in all, the match lived up to the hype and did not disappoint in any measure. The Champions League is off and running!