Chelsea have also been linked to the shot-stopper but reports have emerged that Liverpool have made a world-record £62million bid for the keeper.

It comes after high-profile errors from Loris Karius in Liverpool’s Champions League final defeat to Real Madrid in May.

Reds boss Jurgen Klopp has already made his move in the transfer window, bringing Naby Keita, Fabinho and Xherdan Shaqiri to Anfield.

Alisson looks set to be the next arrival but former Arsenal midfielder Stewart Robson believes Klopp still needs another signing or two if Liverpool want to challenge in the Premier League. 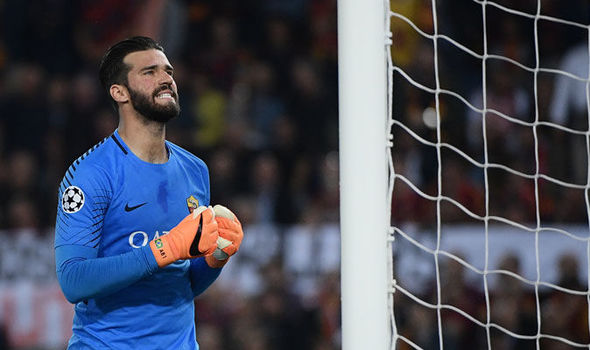 Alisson could make the move to the Premier League with Liverpool

“They’re going to have to play really well, in all areas if they want to challenge,” Robson told ESPN FC.

“But that’s the one area they’ve been lacking for quite a while.

“If they get him, as well as the other signings like Fekir, then I think they can challenge.

“They still need another top-class centre-half. Lovren had a good World Cup but you probably still want another one in there alongside Van Dijk.

Liverpool reached the Champions League final though only finished fourth in the Premier League.

The Alisson to Liverpool deal isn’t done and dusted just yet with Roma holding out for £67m.

The keeper, 25, is apparently keen to make the move to the Premier League with any potential transfer smashing the previous world-record fee for a goalkeeper set by Manchester City when they signed Alisson’s compatriot Ederson from Benfica for £34.7m last summer.